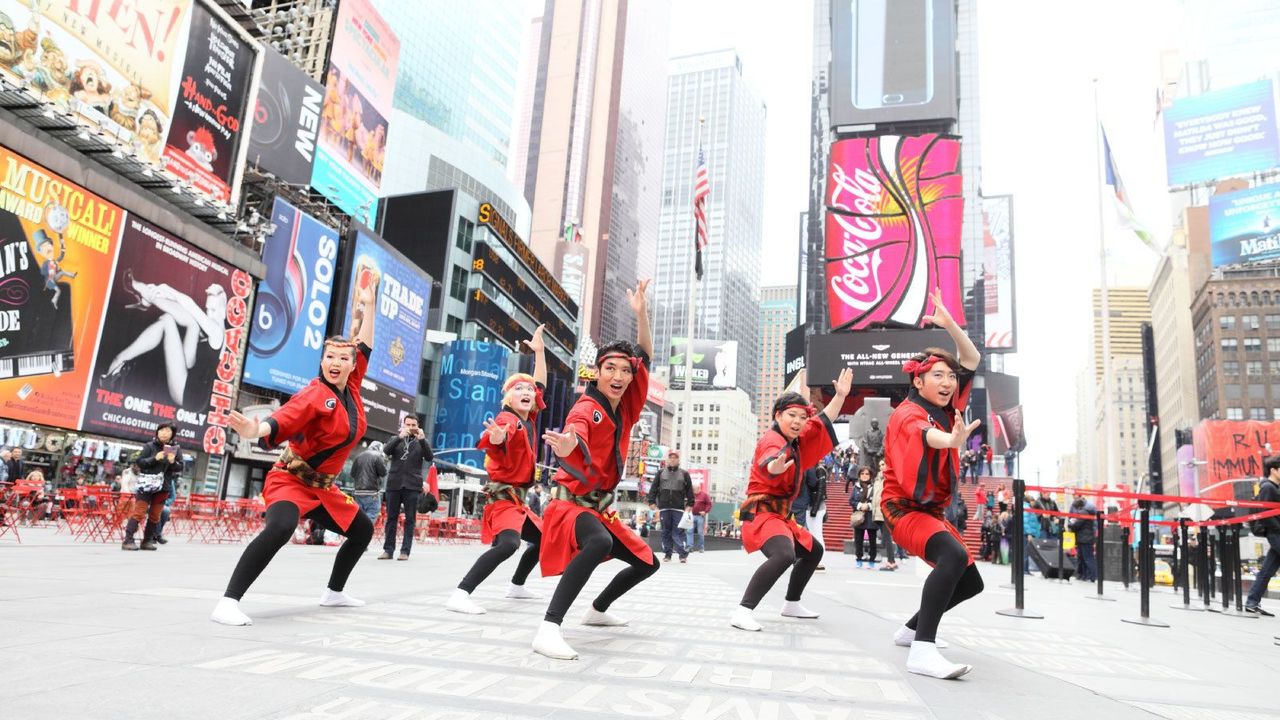 Connecting different generations and cultures with their high-energy, innovative performances, the entertainment troupe Takarabune is bringing the dance tradition of Awa Odori to the world. Not only are they adding their own flare, they’re reaching deep into the dance’s past to revive certain practices that have fallen by the wayside.

Awa Odori is a style of dance that originated some 400 years ago in Tokushima, the capital city of Tokushima Prefecture on Shikoku Island. The most famous performance of Awa Odori takes place in the city of Tokushima between August 12 and August 15. During this festival, the city is taken over by parades of dancers.

It should not be surprising that the founder of Takarabune, Japan's first and only professional Awa Odori dance group, was born in this city. Akira Yonezawa was born in 1949 into a family with considerable ties to the dance, his great grandfather Jusaburo Ichikawa having trained the man who coined the name Awa Odori.

In adulthood, Akira moved to Tokyo and formed his own theatrical company. In 1995, he founded the “creative dance group” Takarabune with the help of his oldest son, Wataru Yonezawa, who now also serves as the group’s producer. At present, Wataru’s older sister Megumi and younger brother Takashi are also key members of Takarabune’s pro-level performers. Talk about a talented family! 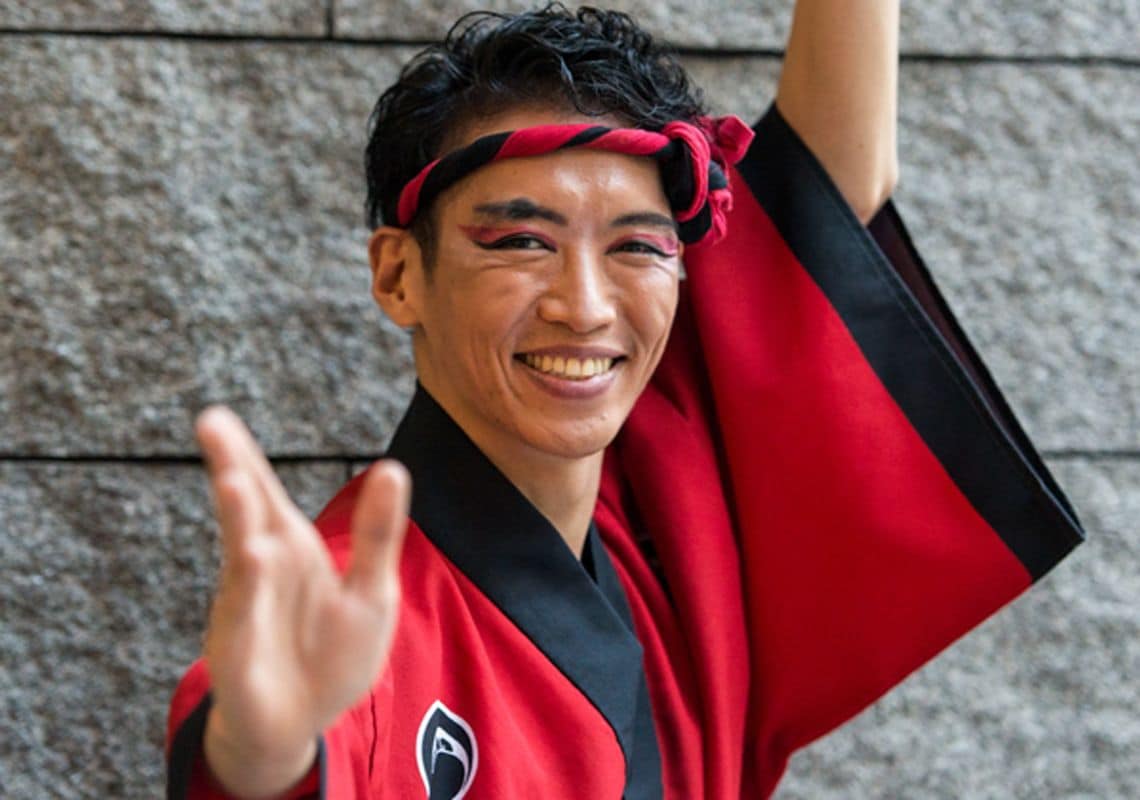 Since its foundation, Takarabune has been pushing the limits of the Awa Odori dance tradition, bridging the gap between “traditional culture” and “entertainment” both at home in Japan as well as abroad. Since 2011, Takarabune has been taking Awa Odori to the world, performing in Honolulu and New York City, India, Paris, London, and Taiwan.

Despite Awa Odori being a uniquely Japanese dance tradition, the energy and passion with which the members perform spans any culture or language gap between themselves and their audiences. Their smiles are contagious, and you can feel their desire to share and connect fill whatever space they're in. It’s not surprising that when given the opportunity, audience members eagerly join in the dancing.

So what does it mean to “push the boundaries” of a traditional performance style? For one thing, it means to borrow contemporary styles to help keep Awa Odori accessible for younger audiences in Japan as well as those abroad like when they walk out on stage in their traditional costumes—plus white gloves and top hats.

Another way that Takarabune is pushing boundaries is to explore the rich history of the dance and resurrect certain styles and practices rarely seen today. One example of this is makeup. At present, Takarabune is the only group where both the male and female members wear makeup.

Even so, Takashi’s makeup is on a whole different level. It’s reminiscent of the MC from the musical Cabaret. While this might seem like another “new” innovation, it’s actually a throwback to the Edo Period (1603-1867) when Awa Odori was strongly influenced by the popular kabuki theatre. Back then, it wasn’t uncommon for Awa Odori dancers to borrow kabuki’s shironuri makeup style and paint their faces white. However, this practice gradually declined after WWII and eventually fell out of practice. This is why it seems “new” rather than “traditional” today. 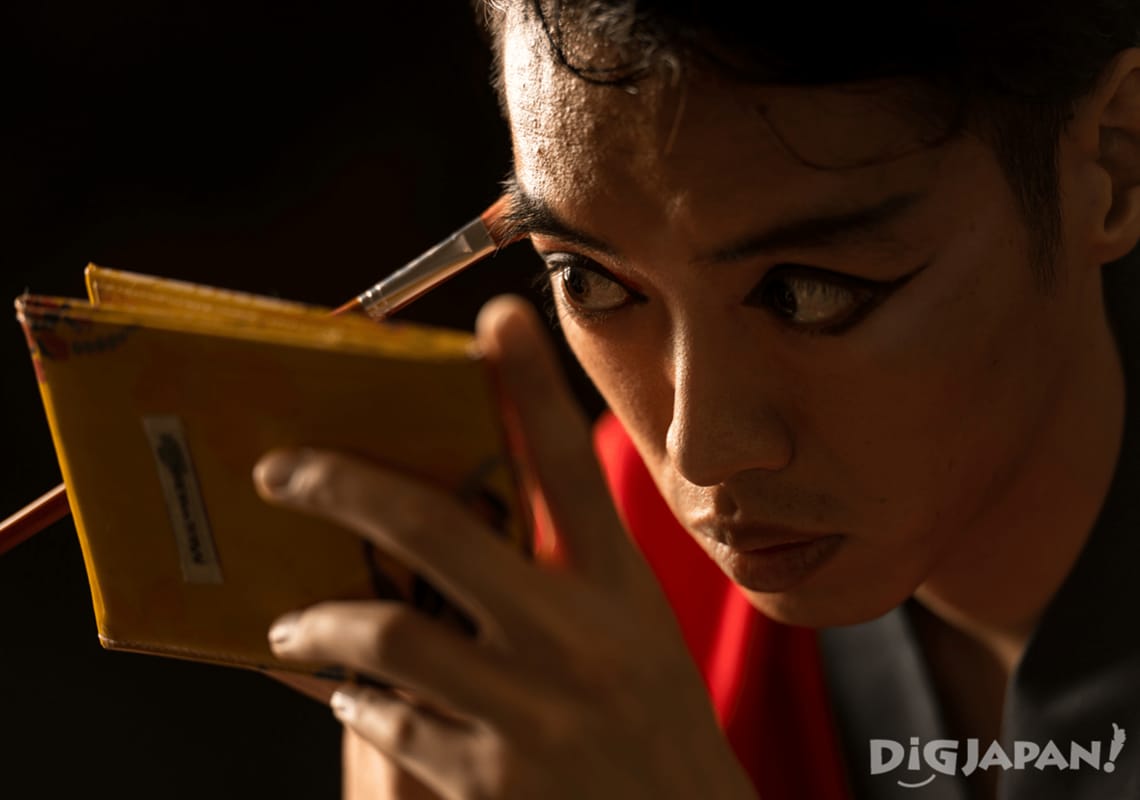 Wataru does his makeup.

There are also plenty of examples from recent history, too. Back in the Taisho (1912-1926) and Showa (1926-1989) Period, some Awa Odori groups were using brass instruments thanks to the influence and popularity of jazz. Some also experimented with wearing boater hats. This kind of makes Takabune’s use of top hats seem right on course when you think about it. 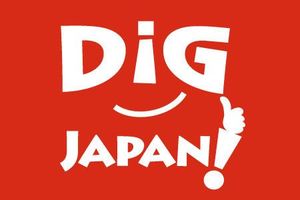 This article originally appeared on DiGJAPAN!.

But there can be some considerable pushback to making innovations inside an art form that has the label “traditional” attached to it. There is often a desire to protect traditional practices and keep them from changing. Rules about how things should be done get made; in turn, these rules can make it hard for a casual observer to participate.

While treating the tradition of Awa Odori with the respect it deserves, Takarabune is working hard to keep this art form alive and relevant by adding their own touches to the dance. Being young themselves (the majority of the members are in their teens and twenties), they know how to use social media like Facebook and Instagram as well as a sharp website to reach people both in Japan and abroad. They're always looking for new places to perform, so maybe they'll soon be making a trip to a city near you!