It was displayed at the recent CEATEC technology show on the outskirts of Tokyo.

Shaped like a humanoid communication robot, RoBoHoN is 19 centimetres tall and weighs around 390 grams. In addition to its smartphone functions, RoBoHoN can also dance and talk with people.

"We wanted to make a phone that felt closer to a user's life than the normal telephone. That idea led us to this humanoid robot phone," said Sharp representative Kuniyuki Maruyama.

The robot is also programmed to learn from interacting with users and thus become smarter, by accumulating users' data in its cloud system. 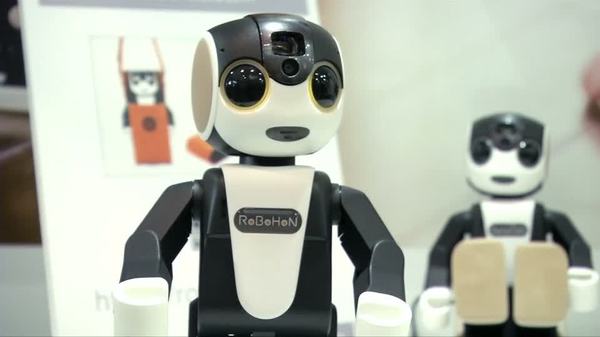 "Because the robot will learn about the user through the daily life they share together, I think it will offer people a much happier life," said Maruyama.

To answer a phone call, users must press the button on the robot's back screen and hold it to their cheek. The speaker is placed inside the robot's mouth.

Visitors to CEATEC were impressed. "It is capable of various things, such as responding to your speech. There are many kinds of way to use it. I think this is really a new idea that we have never seen before," said Naigi.

"I saw it on Twitter first, and then came to see the real thing. It's smaller than I thought and it's really cute," added Miwako Tang.

RoBoHoN can also project images onto any surface from short distances with its in-built forehead projector and even call a cab for its user.

Sharp says the robot phone is expected to be available in Japan in the first half of 2016.