What's the Difference: Teacher vs. Coach? 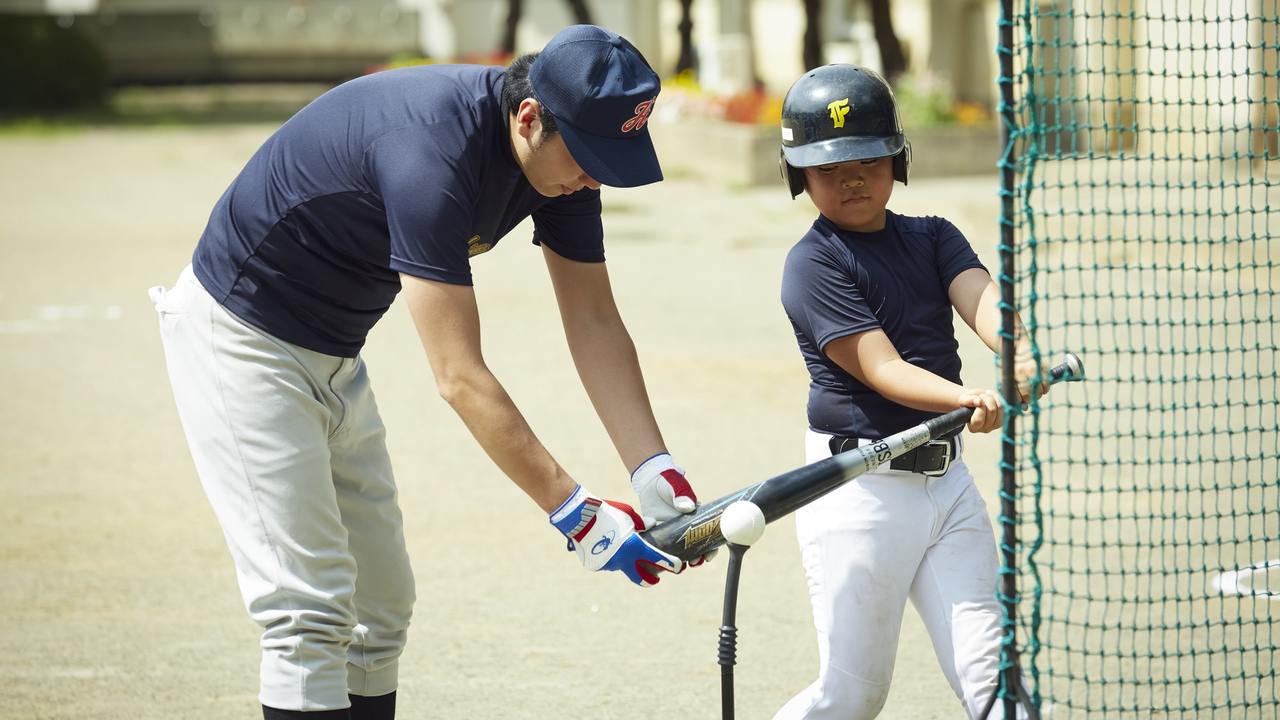 Coaching. It’s a term often associated with sports and career development. And with each passing year, more and more Japanese companies are starting to adopt this word as part of their business and marketing plan.

Hakoda-sensei has been involved in the planning and implementation of such coaching services, where the aim is to provide effective study support for Japanese learners of English. He recounts the constant internal discussions that went on about how this service should be labeled.

“Isn’t what we’re trying to achieve here more like consulting?”
“What do we call the person conducting this service? Trainer, Counselor, or Coach?”

We can all use a helping hand. Fortunately, there are plenty of services out there designed to give you the instructions you need to achieve success. But there also exists many misconceptions about the roles and responsibilities of a trainer, counselor and coach. So which one is best suited for you? Hakoda-sensei helps breaks it all down.

In addition to coaching, we’ve got teaching, training, counseling and consulting. All of these terms carry a consistent purpose: to listen to your needs and provide instruction. So are all of these roles actually pointing to the same thing?

Countless business books have attempted to define the word coaching and its related terms. Although each author categorizes these words using their own interpretations, the general functionality seems consistent across the board. Hakoda-sensei summarizes the key difference as follows:

First, we must consider the two forms of communication that occur between the “actor” (e.g. teacher, trainer, counselor, consultant, coach) and the “client”.

Teaching is the art of passing on knowledge to a group of people. Training involves a trainer who tries to impart his/her skills and best practices to help the client achieve success. Although Teaching is “learning-based” and Training is “practice-based”, both are technically classified as Teaching.

Next, we have Consulting. This is where a consultant provides a method for solving a client’s problem. This too involves the act of giving, hence the reason why it’s grouped together with Teaching and Training.

Nothing is Really Taught in Coaching

Conversely, in Counseling, the counselor asks questions as a means of promoting self-insight and resolving the client’s problems. Coaching is where the coach asks questions in order to establish concrete goals and help raise the client’s current skill level.

Note here that for both Counseling and Coaching, the actor is not involved in direct teaching. Rather, the actor merely asks questions in order to help facilitate self-reflection, which in turn gives the client a sense of agency over their next course of action.

So what’s the difference between Counseling and Coaching? Counseling focuses on solving a specific problem, while Coaching is designed to help achieve one’s goal. It’s often stated that the purpose of Counseling is to help clients recover from a negative past to make the present better, whereas Coaching looks at the present to help improve their future. 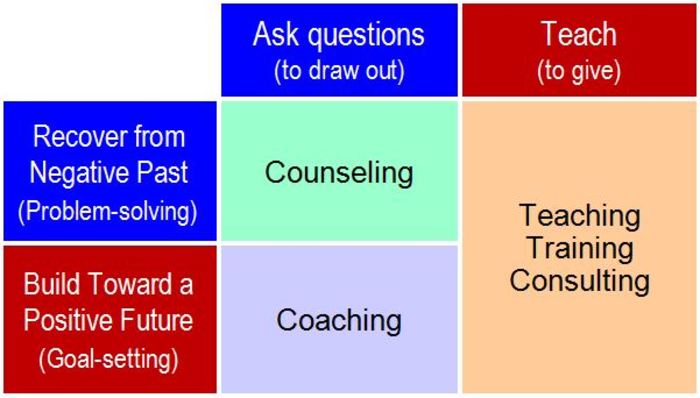 Opinions are split on whether Teaching, Training and Consulting help clients recover from their negative pasts or build toward their positive future. For now, it’s best just to remember that Teaching and Training provide new knowledge or skills, while consulting provides solutions and advice.

Coaching is about empowering the client to find the answers themselves. For beginners without foundational knowledge or for novices lacking experience, Coaching may not be the best option. Even in sports, it’s said that professional athletes are better suited for Coaching, while amateurs do better with Teaching or Training.

Likewise, in business, it’s better to refrain from coaching newly-hired employees. There would be no point in asking them questions like, “So, what is it you want to achieve?” or “What do you think you should be focusing on right now?” If they can’t come up with these answers on their own, there’s really no way to properly coach them.

Coaching comes from the English term coach, which was itself based on the Hungarian word kocsi. Kocs was the name of a 15th-century Hungarian post town where the four-wheeled horse-drawn carriage was born. Hence, “Kocs’ carriage” or kocsi, came to be known as coach.

Coach is still used today when referring to large, horse-drawn carriages or the economy class at commercial airliners. In the U.K., long-distance bus services are also commonly called coach. And of course, coach is the title given to those who instruct others.

It’s interesting that the title coach was derived from “horse-drawn carriages”. Still, when you consider that the purpose of Coaching is to lead clients toward their goal much like a carriage that leads a client toward a particular destination, the term and its etymology makes a whole lot of sense.

Next, let’s look at the word Teaching. Did you know that teach originally meant to show?

The root word of teach is token. Tracing this back even further, we can find that token comes from the old English word tacen (sign) and the German word zeigen (to show). In our definition from before, we know that Teaching is defined as the art of passing on knowledge to others. To show is to teach, thus the word has retained its original meaning.

On the other hand, we have the similarly-grouped word, Training. The origin of the word train is trahere, which is Latin for to pull. This word evolved into traha (sleigh) and was used in the old French word trahine before becoming the English word train.
At first, train meant to draw or to drag behind. It referred to the part of the gown that trailed behind the wearer. The usage of the term train was later expanded to include moving lines of people and vehicles. As time went on, train would be used primarily to refer to locomotives and similar modes of transportation that run on railways.

Since trains were able to draw railcars one after another, the term Training was also used when drawing out an individual’s ability or talent. It’s an interesting coincidence that Coaching and Training were both derived from different modes of transportation (carriages and locomotives, respectively).

Although the original meaning to draw may sound similar to the methods used in coaching and counseling, it’s worth noting that the only thing being drawn out during training is one’s ability. The trainer is the one that is providing the appropriate practice method, hence its relation to the word Teaching. If Training had the same properties as Coaching, you’d be dealing with a trainer who merely asks the trainee what they think the training method is!

Tracing back the roots of Counseling and Consulting can be a bit trickier. The two seem to share a similar linguistic origin—both are derived from the Latin word consulere (to consult). From there, consult went on to retain the original meaning, to consult, while the Latin word consilium (to warn) eventually became the English word counsel (to warn, to advise). Note here that the original meanings (to consult, to warn/to advise) don’t align exactly with the style defined in the current iteration of Counseling and Consulting, which places importance on drawing out the solution from the individual.

The term Coaching may often conjure up images of an intense, hard-nosed coach yelling at his/her players. As its etymology suggests, this makes a lot of sense considering it’s the coach’s job to lead the players toward a common goal, much like carriages or locomotives carry their passengers toward a common destination.

In addition to driving others toward a goal, the coach must also manage people’s motivation. For these reasons, perhaps a coach’s bond runs much deeper than that of a teacher and student’s.

Lastly, consider this—the coach’s job is simply to draw out the best method. The one that needs to carry the brunt of the work is the client. So we can look at it a different way. Clients aren’t passengers along for the ride on a carriage. Rather, they just might be the horse who’s being whipped to go faster and work harder.

So which one is best suited for you? The teacher? The coach? Or a combination of the two? We hope this article helped shed some light on the important role instructors play in our personal development.