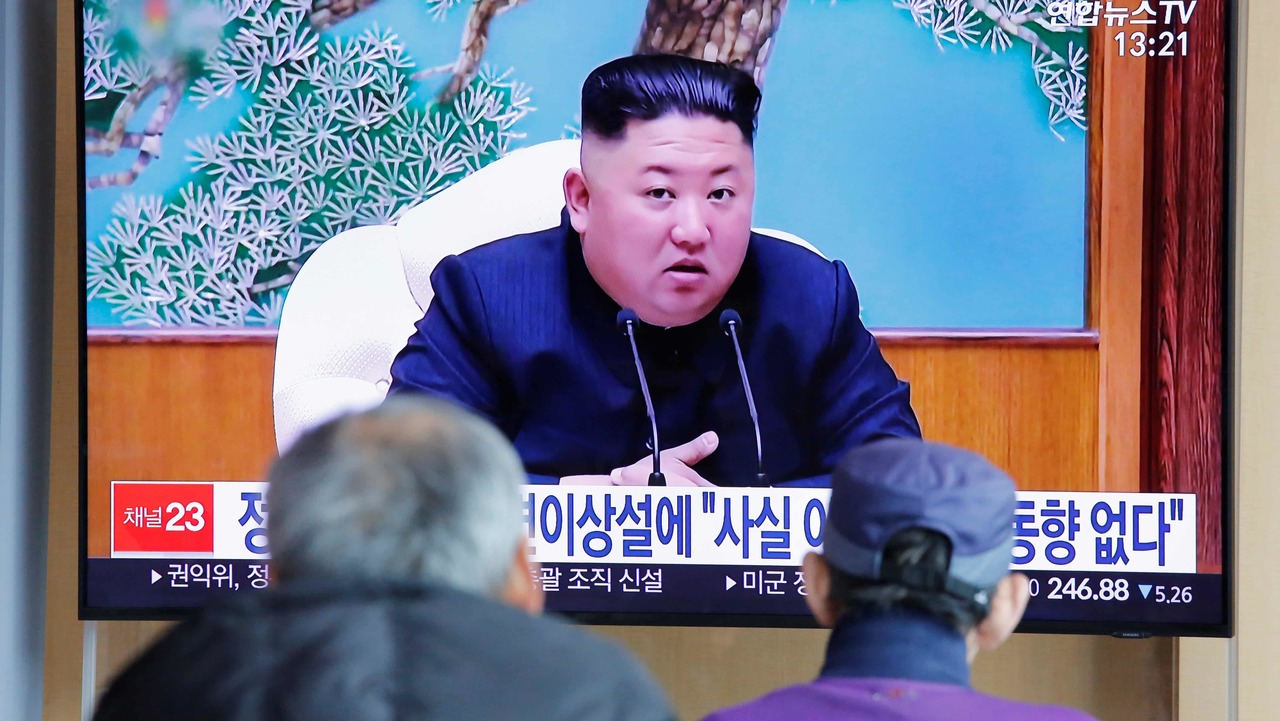 The rumors that North Korean leader Kim Jong Un is seriously ill, perhaps on the verge of death, sent small shock waves through the capitals of Seoul, Washington and Beijing. All three governments were suddenly confronted with the need to prepare for a possible collapse of authority in a nuclear-armed state without any clear plan for succession of power.

While the circumstances surrounding Kim’s health remain murky, it is much clearer that U.S. President Donald Trump, South Korean President Moon Jae-In, and Chinese President Xi Jinping are not ready for crisis within North Korea. Judging from their hurried comments aimed at downplaying the rumors of Kim’s illness, all are hoping that the obese ruler remains in power.

A crisis would come at a time when alliance relations between the United States and South Korea are crumbling, when China has little if no incentive to cooperate, and when all of these governments are completely absorbed and mired in coping with the Covid-19 pandemic.

“As far as I know nobody is really prepared for a collapse of North Korea,” Van Jackson, a former senior defense official for Korea policy in the Obama administration, told me.

“At a high level, I seriously doubt there's been any work done on a collapse scenario in the alliance since Trump came to office. Also, the Moon administration is not interested in what it sees as the self-fulfilling prophecy of collapse planning. China is better positioned than the rest of us if a succession crisis happened, but even China has few inroads and limited leverage,” adds Jackson, currently a Senior Lecturer at Victoria University of Wellington in New Zealand.

The desire to avoid dealing with a North Korea crisis does not mean, however, that no plans exist. The United States and South Korea have a secret Operational Plan (OPLAN) 5029 for carrying out joint military actions in the event of the collapse of the North Korean regime.

While the details remain highly classified, security analysts familiar with its contents say it covers a range of contingencies, including a palace coup in Pyongyang, a civil war among warring factions, natural disasters, and a massive flow of refugees across the border. OPLAN 5029 also covers the dispatch of teams of military and scientific personnel to collect and secure North Korea’s nuclear weapons, security specialists told me.

OPLAN 5029 has its origins in a broad agreement reached in 1997, in the last days of the conservative South Korean Kim Young Sam government, to prepare for possible collapse in North Korea.

The agreement was sparked by the death of North Korean founder Kim Il Sung, followed by a massive famine, and accompanied by the first crisis over their efforts to develop nuclear weapons. This became Conceptual Plan (CONPLAN) 5029, setting out a broad framework for dealing with a breakdown of order in the North.

The progressive South Korean government of Kim Dae-Jung, which came to power in early 1998, was much more interested in pursuing its dreams of reconciliation and reunification with North Korea. Still the U.S. pressed for converting the CONPLAN into an operations plan which would define the flow of troops and equipment and determine who would control those forces.

Under the American proposal, presented to the progressive government of Roh Moo-Hyun which took office in 2003, the forces would be under the command of a U.S. general, similar to the Combined Forces Command set up to deal with a war with the North.

Roh’s National Security Council, in an unusually open statement, rejected the plan as “infringing on the sovereignty of South Korea.” Tough negotiations followed and the plan was not agreed on until a conservative government under President Lee Myung-Bak came to power in 2009.

U.S. military planners in the Korea command, in consultation with counterparts in the Republic of Korea (ROK) military, had drawn up detailed plans for sending hundreds of thousands of forces over the border, with an American commander at the head.

Reality was more complicated. Chun Yung-Woo, a veteran Foreign Ministry official, was briefed on OPLAN 5029 soon after he took up his position as National Security Advisor to President Lee in October 2010, a post he held until early 2013. He found it “unrealistic,” drawn up without regard for either the international system, the legal situation or the internal dynamics of North Korea.

“In any case,” the former national security advisor told me, “the US will not be allowed to command the military operations in North Korea.” The plan envisions Korean troops responsible for stabilization operations, with the U.S. in support, while the US would have the central role in securing weapons of mass destruction.

Brookings Institution expert Jonathan Pollack, who spent many years at the Defense Department-linked RAND Corporation and taught at the Naval War College, participated in war games for the Peninsula.

“These plans are driven (not inappropriately, I suppose) by enduring beliefs that the US military had to have every imaginable contingency covered, in part to demonstrate to civilian leadership that such plans could be rolled out quickly in extreme circumstances, even if they couldn’t be,” Pollack said.

“I think that they were also intended to convince ourselves that the ROK military was fully cooperating with US strategy, even when it wasn’t.”

The OPLAN 5029 remains intact, at least on paper, even after the progressives returned to power in Seoul under Moon, a former chief of staff to Roh, and after the arrival of Trump and his America First approach to U.S. commitments abroad.

While he would not comment specifically on 5029, former Trump National Security Advisor Lt General H.R. McMaster told me that “we tried to anticipate and prepare for all potential contingencies.”

President Trump did push the Pentagon to prepare options for carrying out a surgical strike on North Korea in 2017, as rhetoric about ‘fire and fury’ was escalating. But there was no review or discussion of OPLAN 5029 for a North Korean collapse in the Pentagon, according to Randall Schriver, who served as Assistant Secretary of Defense for Indo-Pacific Security Affairs until the end of 2019.

“In general, military plans, and especially 5029, depend fundamentally on lots of assumptions, including about what the American president will want to do,” David Straub, a former senior State Department official with long experience in Korea, told me.

“With Trump as president, everything has been tossed as out the window of a speeding car. As long as he is in charge, I think 5029 and all such planning is basically irrelevant. Who knows what Trump would wind up doing?”

“Talking about possibility of the regime collapse has become a political taboo. If any situation remotely resembling instability arises in North Korea, I am sure that the Moon administration will do all it can to save, stabilize and support the Kim Jong Un regime.”

The prospects for cooperation between Moon and Trump are undermined also by the stalled talks on defense cost sharing between the two countries. Trump blocked a compromise deal drawn up by officials from both sides and there are vague threats that U.S. forces might be drawn down to put pressure on South Korea. But Moon’s readiness to make concessions is undoubtedly lessened after his landslide victory in the mid-April parliamentary elections.

What about China? The Chinese Communist Party retains close ties with its North Korean counterparts and China is the main source of economic and strategic support for the regime.

American policy makers have long speculated about the likelihood that the Chinese, faced with instability in North Korea, could carry out a coup and implant a new leadership. But others are skeptical about China’s ability or desire to intervene in the internal struggles that may emerge in North Korea if Kim dies.

“They will leave North Koreans to sort out their succession problems and respect whatever the Korean Workers Party decides, despite the widely shared contempt the Chinese may have about the dynastic succession,” says South Korea’s Chun.

“They are more concerned about massive outflow of refugees from North Korea and will try to fend off refugees. They will do what they can to stabilize the situation through humanitarian assistance. Politically, however, they will be careful not to side with one faction or another. Actually, they have no practical means to influence the outcome of any political struggle in North Korea.”

Nor are the Chinese likely to cooperate with the U.S. to deal with a breakdown of order in North Korea.

“Those days, if they indeed ever really existed, are over,” former Principal Deputy Assistant Secretary of State for Asia and the Pacific, Evans Revere, says.

“The unfolding breakdown in U.S.-China relations, the shift in China's thinking about its strategic relationship with the U.S., Beijing's focus on rebuilding its ties with Pyongyang, China's belief that it can have good, stable relations with both Koreas, the PRC's desire to nudge the U.S. out of the neighborhood, and the evident preparedness of the Trump administration to be nudged, all tell me that the 'good old days' of U.S.-PRC cooperation on Korea are probably over.”

The rumor mills may continue to grind out new stories from behind the wall of secrecy in Pyongyang, and some may turn out to be true. And OPLAN 5029 remains on the books. But the will to act may not be so easily found.