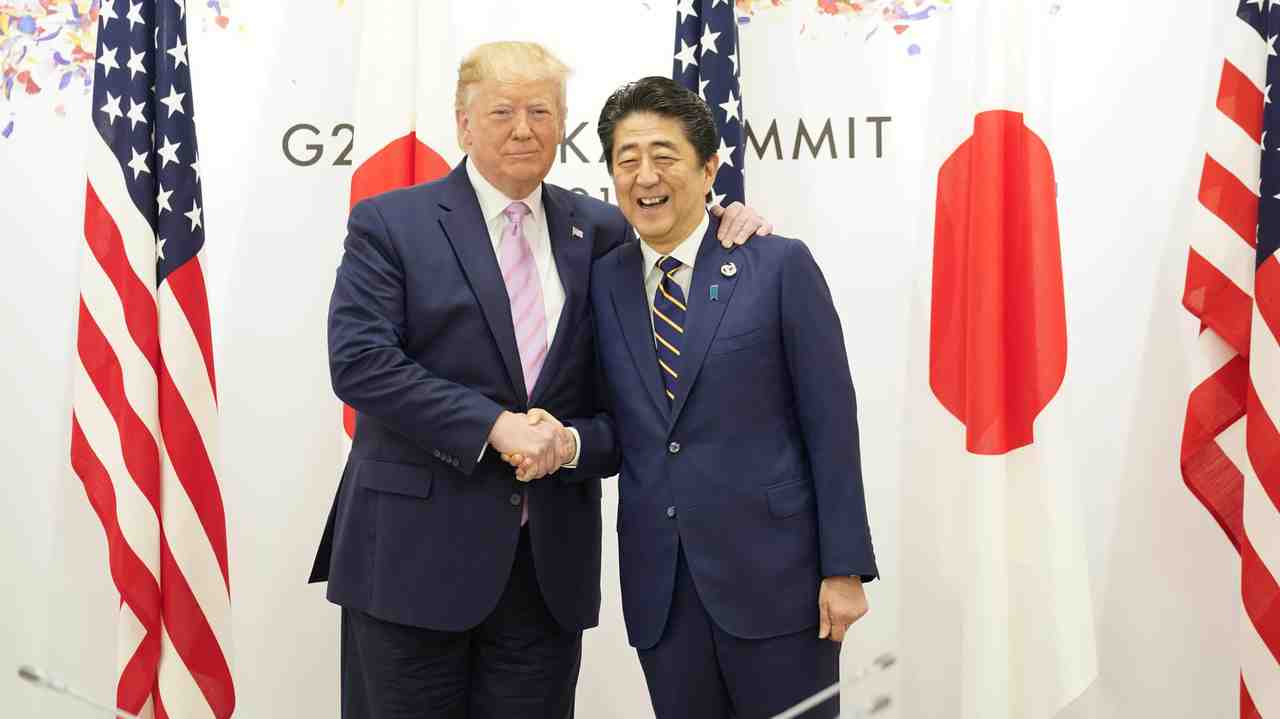 The election campaign for Japan’s House of Councilors is now in full swing. At the center of Prime Minister Abe Shinzo’s appeal to be given a new mandate, and even to extend his rule, is his claim to “lead the world toward solution of global issues,” as the election manifesto proclaims.

Unfortunately for Prime Minister Abe, this claim looks rather hollow at this moment. The G20 summit turned into a platform for prancing authoritarian leaders. Despite Abe’s almost desperate attempts to curry favor with the mercurial American President, Donald Trump is now heading toward a deal with North Korea that will leave its nuclear and missile threat to Japan completely intact, while threatening to tear up the US-Japan security treaty that protects Japan. At the same time, Trump seems intent on forcing Japan into a trade agreement that could trigger a recession.

“In diplomacy things don't always go as planned, especially when they involve Typhoon Trump,” comments Temple University scholar Jeff Kingston. “There is a long line of people who have been humiliated and diminished by their association with Trump but no other world leader has been so comprehensively embarrassed and belittled as Abe.”

The Prime Minister’s office is desperately trying to reassure the Japanese public that all is going according to plan, that the President’s comments can be ignored or, at worst, are just an attempt to gain electoral advantage. The spin from Kantei has its own electoral purpose.

“Abe knows it is a nightmare,” a veteran Japanese political journalist told me, “but he will do whatever it takes to make it look normal. Because admitting that it is a nightmare means that his subservient diplomacy toward Washington has failed miserably.”

The G20 Showcase gets cloudy

The Abe administration spent months preparing for the G20 summit in Osaka, intending to use the annual gathering as a showcase for the leadership of Japan, and of the Prime Minister. The Japanese bureaucracy prepared a bundle of measures on digital privacy, environmental protection, climate change and a defense of free trade, all designed to promote the idea of Japan as a guardian of the liberal international order.

Instead the meeting was dominated by a display of Trump’s claim to lead the world and his close friendships with authoritarian leaders, from the Saudi Crown Prince to Russia’s Putin and China’s Xi. The final G20 communique removed any talk of fighting protectionism and settled for bland general statements about free and fair trade.

The summit signaled “an edge towards rule by might,” wrote Australian National University scholar Shiro Armstrong. “The Osaka G20 summit may yet be remembered in history as the moment the global rules-based order was lost…The uncertainty that has clouded the global economy over the past few years is child’s play compared with what could come now.”

The Prime Minister’s office got a sense of the dark clouds headed their way when Trump let loose only a couple of days before arriving with another assault on Japan’s trade imbalance and repeated long-held views of Japan as a defense free-loader.

The remarks got lots of attention but inside the Prime Minister’s office the reaction was calm. “We have gotten quite used to hearing outrageous comments from POTUS (President of the US),” a senior official involved in planning for the summit told me. “In that sense, there has been no ‘consternation’ in Japan. The Prime Minister did not think it had a serious intention but was a kind of ploy to get more concessions in the trade negotiation.”

Still Abe was worried enough about how this would look to the Japanese public that the Prime Minister’s Office reportedly curbed the press access to the brief bilateral meeting with Trump, fearful of what the American President would say to reporters. They could not control, however, Trump’s final press conference at the end of the G20 summit. There Trump went beyond his earlier statement and told reporters that he had told Abe “for the last six months” that it was time to change the 1960 Japan-US mutual cooperation and security treaty, the foundation of the postwar partnership.

The Prime Minister and his close aides at firt denied that any such conversation took place. Now the Abe admits that Trump said this many times in times in private conversation. But there is not evidence this has turned yet into policy.

According to well-informed American sources in close contact with the American military command in Japan, “Trump’s call to renegotiate the alliance is news to them.” They too see this as mainly an attempt to link security with trade “to gain concessions at the negotiating table.”

Negotiations on Japan’s contribution to U.S. defense costs in Japan will begin in six months or so and the threat to abandon the alliance is a tactic Trump already used in negotiations with South Korea to force a higher payment.

But the damage has been done. “Trump’s latest salvos targeting the Mutual Security Treaty are unsettling for Tokyo and music to the ears of Beijing and Pyongyang while undermining Abe's claims that the bilateral alliance has never been stronger, arguably his sole diplomatic achievement,” says Kingston. “Abe has made his desire for amending the war renouncing Article 9 of the constitution the focus of the upcoming upper house election, but now will have to convince voters that this won’t mean Japan will have to fight wars at America's behest.”

Right after Osaka, the Japanese government got hit with another shockwave from Korea when Trump met North Korean leader Kim Jong Un in an impromptu mini-summit at the DMZ. Other than the visual imagery of an American president symbolically crossing a few steps into North Korea, the ostensible outcome of this display was an agreement to restart official level talks that have been effectively suspended since the abortive second summit in Hanoi in February.

The Hanoi summit broke down over the exposed gap between the North Korean and U.S. understandings of denuclearization. The North Koreans refused to specify what facilities they were prepared to shut down in the first phases of this process, while insisting that all major sanctions be lifted. The resumption of talks could signal a North Korean willingness to put more on the table.

But it also reflects clear indications from Trump, as well as from special envoy Steve Biegun, that the U.S. is prepared to settle for a much less ambitious version of a freeze agreement, with actual denuclearization set well off into an unspecified future. As the New York Times reported, this would mean accepting North Korea’s status as a nuclear weapons state, including its missile delivery systems, while capping any future production. This idea is not new – Japanese officials have been worried about this kind of bad bargain since the summer of 2017.

Senior American officials denied the report – but read more precisely, they denied their own knowledge of and support for this kind of deal. “I have heard nothing resembling what [the New York Times] describes,” a senior official who has been directly involved in the North Korea talks told me. “I know [Matt] Pottinger hasn’t either,” he added, referring to the senior National Security Council Asia director.

In reality, National Security Advisor John Bolton and Pottinger were cut out of the DMZ talks, dispatched on an oddly timed visit to Mongolia. The North Korea operation is now entirely in the hands of Secretary of State Mike Pompeo and Biegun. The Secretary has tied his future political ambitions entirely to Trump and will not defy him, as Bolton might be tempted to do.

The Prime Minister’s office issued ritual support for Trump’s latest embrace of Kim, claiming again, without evidence, that abductees were on the agenda and that Japan’s advice not to leave a nuclear-armed North Korea with its missiles aimed at Japan is being heard.

But a veteran Seoul-based Western journalist cites reports, not yet confirmed, that “Trump in his private conversation with Kim at Freedom House in the Joint Security Area may have intimated that the U.S. would not insist on N. Korea really giving up all its nukes and missiles and the means to make them.”

The third nightmare for Abe is likely to be the upcoming bilateral trade talks with the U.S. With the China negotiations now moved away from the brink, American negotiators, led by Robert Lighthizer, will be able to focus on Japan. And the signals are clear that Trump wants to push hard for an agreement to limit Japanese auto exports to the U.S. “With Japan, we’re negotiating with them because they send us millions of cars and we send them wheat,” Trump told reporters in Osaka. “Doesn’t work.”

The Japanese negotiators see this coming. “I am a bit tired of hearing Amb Lighthizer and President Trump making one-sided demands,” a senior member of the Japanese trade negotiating team told me. “I hope we can stand firm and defend the ‘red line’ for us in the end.”

A restraint agreement for Japanese auto exports would be a disaster for a Japanese economy already feeling the effects of the China-US trade war and facing a sales tax increase in the fall. But for now, Abe needs to preserve the image of a close and friendly alliance with the U.S.

“Abe thinks that a good relationship with Washington gets more votes in Japan, no matter what president sits in the White House,” the veteran Japanese journalist said. Winning the election and staying in power is the key goal, he noted harshly, even if means “whitewashing the grave peril of worldwide populism.”