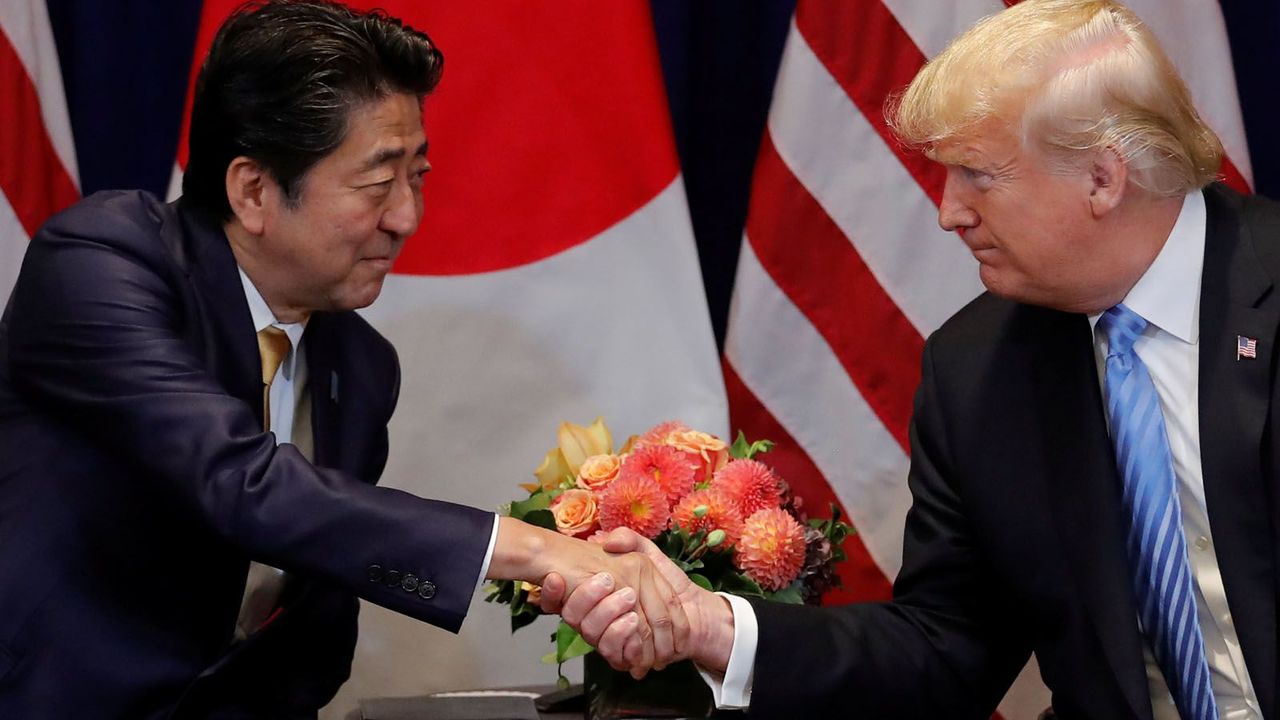 Abe Shinzo has defied political pundits with his ability to escape scandals over influence peddling that would have forced previous Japanese leaders to resign. Now another dark cloud is drifting into sight -- Casinogate.

This affair involves Abe, U.S. President Donald Trump, and the most powerful casino magnate in the U.S., and perhaps globally, Sheldon Adelson, the owner of Las Vegas Sands. At the core lies this question – did Abe push through casino legalization in Japan with the intention of awarding a multibillion dollar bonanza of a license to Adelson’s Sands, hoping to gain the favor of Trump, who is tied intimately to Adelson?

At the moment, there is no clear answer to this question. But a blockbuster investigative report from the premier U.S. investigative news organization, ProPublica, published this past week, points a clear finger at both Abe and Trump. It reports authoritatively that Trump, during Abe’s first official visit to him in February 2017, lobbied Abe to award a casino license to Sands, and to at least one other U.S. casino company.

At a meeting at Trump’s Mar-a-Lago estate during that visit, Trump pushed Abe to give a license to Las Vegas Sands, and also mentioned another company, either MGM or Wynn Resorts (sources differ). The bold push from Trump supposedly surprised Abe.

“It was totally out of the blue,” one of the people briefed on this meeting told ProPublica’s Justin Elliot. “They were a little incredulous that he would be so brazen. Abe didn’t really respond, and said thank you for the information,” according to this source.

The prime minister and senior officials deny that Trump lobbied on behalf of Adelson. Abe, however, was hardly unfamiliar with Adelson and with Sands. The Vegas casino operator had been lobbying Abe directly since he came back to power, including arranging a May 2014 tour of his Singapore integrated resort and casino, which became the model for the casino law promoted in Japan. “I think integrated resorts will be a key part of Japan’s economic growth strategy,” Abe was quoted saying during his tour of Sands showcase casino resort.

For Adelson, the Japanese market is the last and most lucrative untapped opportunity for legalized gambling. It is estimated to be a market worth up to $25 billion a year, second only to Macau.

Adelson, as the ProPublica story documents, was a long-time Republican party funder, one who was initially skeptical of Trump but later contributed $25 million to his campaign and inaugural festivities. Even now he is a massive donor -- $55 million and rising – to the Republican party’s midterm election campaign. He enjoys ready access to the President, and also to his son-in-law, Jared Kushner, whose family has long and close ties to Adelson.

There is considerable evidence, which ProPublica investigated but could not totally confirm, that Adelson was the key actor in setting up Abe’s remarkable meeting with Trump at Trump Tower in November 2016, within days of his election victory. As the first world leader through Trump’s door, Abe gained a tremendous foothold with the controversial American leader, a relationship that has been often cited as the achievement of Abe’s personal diplomacy.

Only a few weeks later, Abe surprised political observers by ramming through a long-stalled bill in the Diet to set the framework for legal casinos, after almost no debate and despite widespread opposition from both the populace and almost all political parties.

In February of 2017, this writer had a conversation with a well-established American businessman in Japan who told me that Adelson had arranged Abe’s meeting with Trump, via his connection with Jared Kushner, who was present at that meeting with his wife, Ivanka Trump. He told me further that in return for this service, Abe pushed through the casino legislation, with the clear understanding that Sands would be first in line for a license. I could never confirm this story, but it circulated in business circles.

Roland Hinterkoerner, a partner in the financial services firm Orfi Capital and a veteran banker in Asia, wrote precisely this on February 28, 2017 in his “Expertise Asia” online newsletter. Citing a “reliable source of mine,” the banker reported that “Abe’s original visit to Trump Tower was partly, if not largely, choreographed by Las Vegas casino tsar Sheldon Adelson who happened to have contributed generously to the Trump campaign. Coincidence then had it that shortly after Abe’s return from New York the new casino bill was pushed through the Diet in early December.”

Adelson’s ability to arrange such meetings with Trump not only benefited Abe. According to both Expertise Asia and ProPublica, Adelson also arranged, shortly after Abe, a meeting at Trump Tower for Softbank’s Son Masayoshi.

Son’s SoftBank, for its part, owns Sprint, which has long wanted to merge with T-Mobile but needs a green light from the Trump administration. A beaming Son emerged from the meeting in the lobby of Trump Tower with the president-elect and promised $50 billion in investments in the U.S.”

A few days after Trump’s inauguration in late January of 2017, Adelson told a Las Vegas Sands earnings call that Abe had not only visited the Singapore casino resort but “was very impressed with it,” according to the ProPublica investigation. Only days later, Adelson attended a breakfast meeting with Abe in Washington, during his official visit, along with two other casino industry executives, where the casino issue was discussed, an attendee told ProPublica. The dinner with Trump at Mar-a-Lago followed.

The idea that Abe was unfamiliar with Adelson and Sands when Trump raised it at dinner is hardly credible. When Nikkei first reported the dinner discussion, in June 2017, it led to questioning in the Diet by Democratic Party Upper House member Sugio Hideya about a deal with Trump. Abe claimed that he never had a conversation with Trump regarding the bids of Sands and other U.S. companies, an account that ProPublica contradicts.

Adelson, for his part, has made no secret of his belief that he has gained the inside track to gaining a casino license in Japan. As ProPublica reported, Adelson told a recent earnings call to shareholders that his lobbying efforts were succeeding. “The estimates by people who know, say they know, whom we believe they know, say we’re in the no. 1 pole position,” Adelson said.

Adelson has been much more open recently in his activity in Japan. Last September 2017 he visited Osaka, the likely favored spot for his casino, to meet the governor and mayor. He felt no compunction in criticizing an earlier draft of the IR implementation law for its restrictions on the size of the casino resorts space dedicated to gambling. He flew in stars like David Beckham to promote his bid. And when the law was passed in July, the limits on casino floor area had been dropped.

Many other casino operators are engaged in bidding for a license, including large firms like MGM, Wynn, Caesars and the Macau giant Melco. Smaller operators are hoping to grab the license that will go to a smaller regional center, while large casinos are looking at setting up in Tokyo and Osaka.

Some of them have mounted very public campaigns with offices in Japan, lavish events to lobby regional and other authorities, and public relations efforts. But Sands has barely bothered with such efforts.

“Sands is almost universally regarded as top contender for one of Japan’s major IR licenses,” the industry publication Asian Gaming Brief reported last month, “but their ground game is not as apparent as some of the others. They have not established their own Japan representative, and are instead running their campaign out of Singapore. While Sands has hired influential agents in Japan, their operation is reminiscent of a giant iceberg: what lay above the waterline is certainly dwarfed by what lay below.”

The iceberg below the surface, it is implied, is the Trump-Abe-Adelson triangle. The ProPublica story has quickly received widespread attention in the U.S., where it has been cited by other major publications including the influential online publication Axios.

The normally timid Japanese media have started to report on it. But will they now begin to do their own digging into Casinogate? Only that will likely determine if this scandal will grow to Lockheed proportions, or become yet another example of how the always nimble Prime Minister manages to escape from political disaster.