A Declaration Of Peace That Leads To War 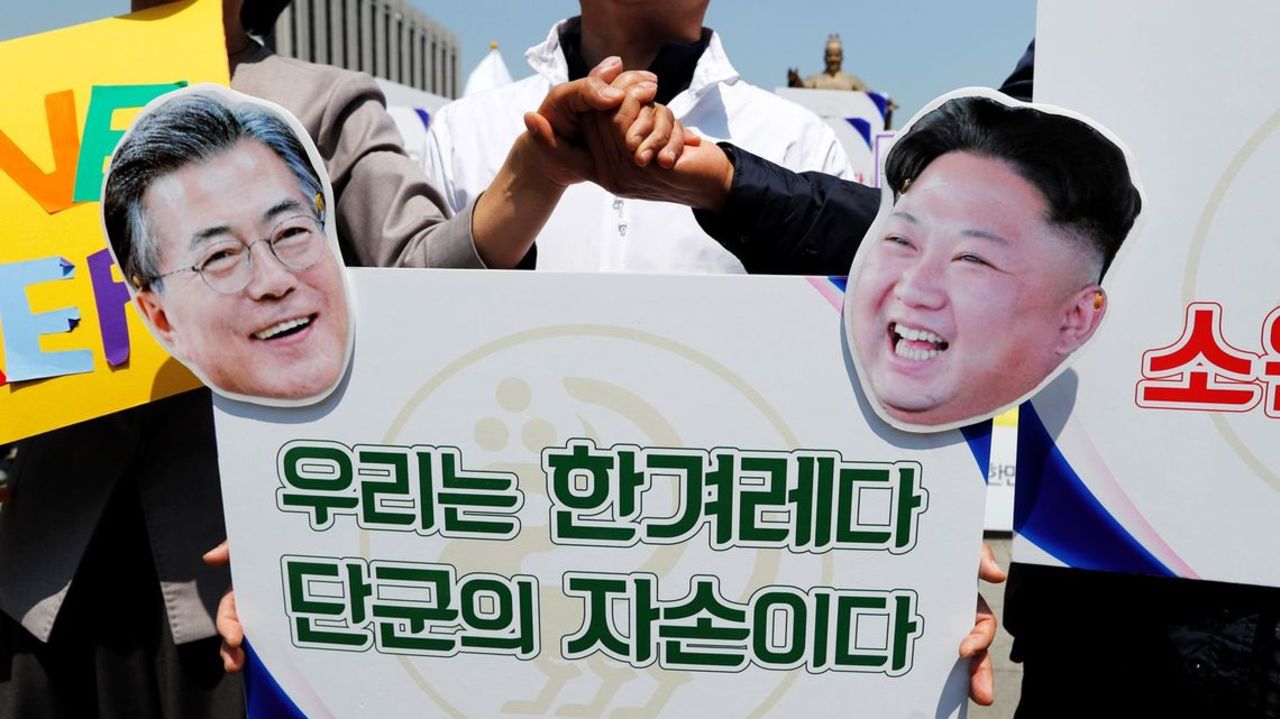 On Friday, the leaders of the two Koreas are set to meet on the southern side of the demilitarized zone and sign a declaration of peace. In a carefully planned summit, negotiated in detail down to the dinner menu, Kim Jong Un and Moon Jae In will claim to have ended the suspended state of war between them and set the Korean peninsula firmly on the path to peace.

Do not be deceived. The peace declaration is more likely to lead to war. But this may not be evident for a while. For now, the North-South summit will succeed in accomplishing its most important short-term goal – to define the ground for the more consequential meeting to follow in a month between Kim and U.S. President Donald Trump.

The meeting at the DMZ is set to yield, according to the plans of South Korea’s Blue House, several agreements. The peace declaration will be the centerpiece and it will be accompanied by a re-commitment to the 1992 Joint Declaration on “the Denuclearization of the Korean Peninsula.”

This will be paired with measures to improve inter-Korean relations, including the re-opening of economic cooperation and grand plans, outlined by President Moon last year in Berlin, to unite the two Koreans into “One-Market Korea.”

All this is consciously aimed at setting the stage for the next summit. The momentum to lift sanctions will be created, with China, Russia and South Korea already heading down that road before the Americans have even entered the room. Japan will remain, as is painfully evident, effectively isolated from the main stage.

“Moon is going to do whatever the market will bear in terms of his domestic political situation to give North Korea economic help,” says a former senior U.S. State Department official with long experience on Korean matters. “He is using this upcoming meeting with Kim to set up a framework, to make it look like Kim is a guy you can deal with, a guy you can trust, who feels threatened by the U.S.”

Kim has already done his part in this theater production, issuing a pre-emptory suspension of nuclear and long-range missile tests and the closure of a nuclear test site which had been heavily damaged due to the test last fall of a massive warhead.

The Kim opening move set off a spiral of responses – an almost immediate Trump tweet greeting it as evidence of progress toward denuclearization and Blue House praise for the move, followed by cautionary warnings from unnamed White House aides about accepting steps that would fall far short of the stated goal of complete and verifiable dismantlement of North Korea’s nuclear weapons program.

All this ended with reassurances from a senior administration official that “substantial dismantlement” will have to come first before the “maximum pressure campaign,” the term of art for the sanctions regime, is halted.

This is an empty threat. The reality is that the only meaningful sanctions are those imposed by China, which provides 90 percent of North Korea’s trade. And the Chinese are already jumping on this opening provided by Pyongyang, with the support of Seoul. For a sense of the Chinese attitude, an editorial issued on April 22 in the Communist Party daily Global Times called strongly for the U.S., South Korea and Japan to respond positively to Kim’s negotiating gesture:

“If Washington still wants to coerce Pyongyang to abandon nuclear weapons with maximum pressure, it will be dangerous, and neither China nor South Korea will agree to such an approach. It will probably herald a return to even more intense turmoil.

The international community should encourage North Korea by lifting some sanctions and resuming certain exchanges, showing North Korea the huge benefits its return to the international fold will bring, and the significance abandoning its nuclear weapons will have on its security.

Pyongyang has paid a hefty price for its pursuit of nuclear weapons. It will only abandon its weapons program if it believes that giving it up will bring more benefits than keeping it.”

Donald Trump is thus set up for a no-win choice. He can buy into a freeze deal, one that may have a clear timetable but will be completely reversible, and lock in North Korea’s status as a nuclear weapons state. Trump, eager for a “win,” will claim victory in what a former CIA official calls a “superficially successful summit.”

“President Trump will expect that he is off the political hook at home,” predicts former South Korean foreign minister Han Sung-joo, speaking to the Asan Plenum in Seoul this week.

“Chairman Kim will claim that North Korea's status as a nuclear power has been recognized, and therefore any negotiation with the US on denuclearization will be an arms control talks between nuclear powers. President Moon gets both thanks and criticism at home for peace breaking out (at least for a while) in Korea, but also for misleading people that denuclearization of North Korea is at hand.”

Alternately, Trump will walk out, claiming that the North Koreans have refused to offer real steps that lead toward denuclearization.

The latter course is what his hardline advisors, led by National Security advisor John Bolton, are preparing to happen. Bolton left the State Department precisely over Bush’s switch to a policy of active engagement with North Korea, led by Secretary of State Condoleezza Rice and carried out by Amb. Christopher Hill.

In the view of the former senior State Department official, who served with him, Bolton is supporting the summit meeting anticipating that he can convince the President that Kim and the North Koreans are “bad guys who have disrespected him.”

Bolton “will get try to get Trump into the mindset before the meeting that the North Koreans are going to try to cheat and there needs to be a tight time line of verifiable actions,” a course that Pyongyang rejected in previous such freeze deals.

North Korea’s Kim is hardly unprepared for this course of events. Indeed, as Slate’s Fred Kaplan argues this week, “it could be in Kim’s interests for the summit to fail.” He will have demonstrated to the most important audiences – those in South Korea, China and Russia, who can provide the economic help he seeks – that he has bargained in good faith.

“If the summit fails, Trump will likely be blamed for its failure,” writes Kaplan. “And if Trump reacts to the failure by reigniting his ‘fire and fury’ rhetoric, with threats of actual fusillades to follow, our Asian allies—whose leaders welcome a relaxation of tensions with North Korea but also rely on security guarantees from the United States—will likely peel away from Washington, fearing Trump’s belligerence and distrusting his assurances. And that is precisely what Kim wants most.”

In this writer’s recent conversations, senior officials in the U.S. intelligence community involved in the planning for the summit expressed the belief that either way, the summit may lead to conflict. If Trump comes to the summit and finds that Kim is, as Bolton believes, setting a trap for him, he may turn around and attack Kim, initiating a major crisis on the Korean peninsula, some say.

In this view, it is up to China and the U.S. to take care of the North Korean problem. If the Trump administration opts to “resolve” the problem in a final manner, they need to come to an understanding with China on a new leader and get South Korea and Japan to go along.

The credibility of claims of North Korea’s readiness to give up its nuclear arsenal in Washington is zero, the result of years of negotiation and failed deals, intelligence officials argue. Still, the U.S. may opt again to “manage” the problem – to accept an agreement for now that will fall short of denuclearization, to “kick the can down the road,” and in the interim build up U.S. military capability in the region to be able to deliver a decisive blow to North Korea in the future.

“We can count on the fact that North Korea, sometime down the road, will find some excuse to back out of any agreement that we sign with them,” an intelligence official predicts. If North Korea moves to resume testing of nuclear weapons or long-range missiles, the U.S. will respond immediately militarily, in overwhelming fashion.

Such an attack could even be coordinated with China, the official hinted. In that case, he told me, the U.S. will not consult the South Koreans, who are certain to object to any initiation of military action.

This how the declaration of peace this week in Korea could lead, relentlessly, to war. Of course, when it comes to the decisions of Donald Trump, nothing is predictable.