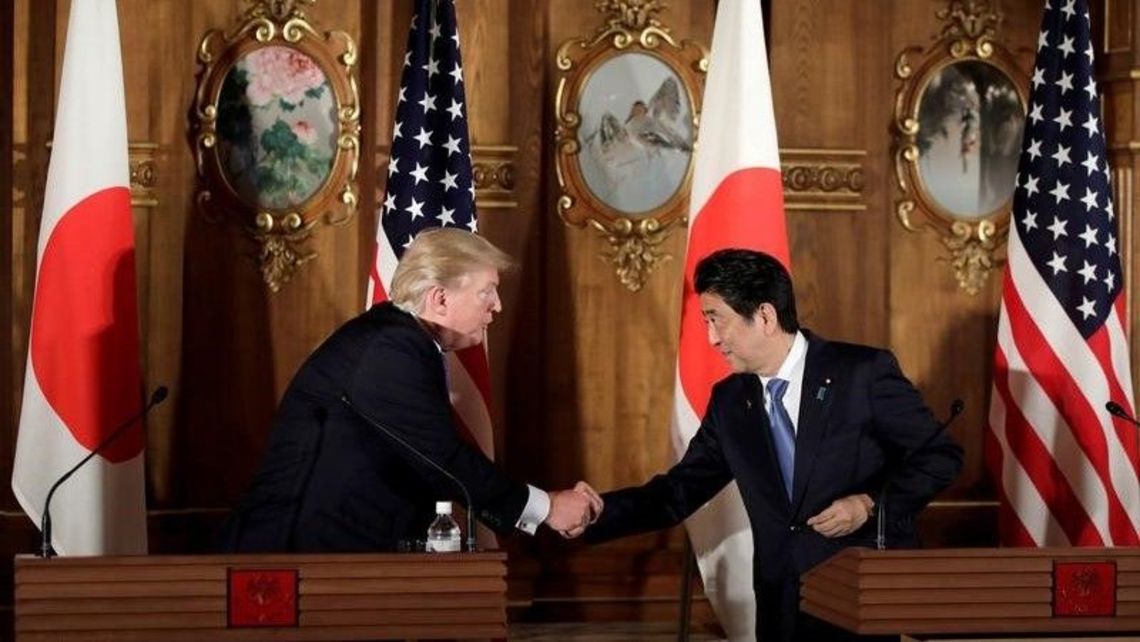 When Prime Minister Abe Shinzo and President Donald Trump meet again in the familiar surroundings of the President’s Mar-a-Lago estate, every effort will be made to convey the impression of a gathering of two old friends, united in common purpose.

But since their previous meetings, cracks have opened up over key issues, beginning with trade but including foreign policy problems from North Korea to Russia and Iran.

For both leaders, however, domestic politics will shape how they deal with these urgent issues. Both leaders meet in the sunshine of Florida with dark clouds hovering over their heads – the clouds of scandal, constitutional crisis and potential political demise.

With federal prosecutors and special counsel Robert Mueller closing in relentlessly on him, Trump’s display of force in Syria offers a ready means of distracting attention. His gyrations on trade policy – talking of negotiations on the Trans Pacific Partnership (TPP) one day and demanding a bilateral deal with Japan the next -- reflect his attempt to placate conflicting pressures from his supporters.

Abe is similarly obsessed with his own political woes as once buried scandals have resurfaced, with fresh accusations of coverup and new evidence of his personal involvement. The hastily arranged meeting this week may have been sparked by the decision of Trump to hold a summit with North Korean leader Kim Jong Un. But it is now driven by the Japanese prime minister’s almost desperate need to demonstrate his successful management of the alliance with the United States.

“Abe needs to come back from his visit with something,” a senior Trump administration official told me. His immediate goal is to get Trump to exempt Japan from the recently announced steel and aluminum tariffs and to pledge to raise the cause of the Japanese abductees to North Korea when he meets Kim.

Abe is also seeking reassurances that the U.S. will not cut a deal to curb North Korea’s long-range missiles that effectively leaves Japan isolated and exposed to shorter-range missile attack.
“If he doesn’t come back with the exemption from steel and aluminum tariffs, that’s a killer for him,” the senior official says.

“As for abductees, I doubt Trump will raise it with the North Koreans but they are going to say they raised it. Everything that Trump says to Abe regarding North Korea is going to be lip service.”

Avoiding an open break on trade

Trump, for his part, needs to demonstrate his tough stance on trade imbalances, even if it rattles Wall Street and undermines support in agricultural export producing areas.

While he talked of re-examining TPP in a meeting with Republican leaders, the next day he proclaimed he would only join it if the TPP is completely renegotiated. When it comes to Japan, a country “who has hit us hard on trade for years,” he tweeted, a “BILATERAL” deal is on the agenda.

If Abe wants to come away with a concession on steel tariffs, the message is clear. “From the Washington side, there is disappointment that the Japanese have not moved an inch on the bilateral FTA,” the senior official told me.

Abe is now in a very difficult position. Senior members of his cabinet have issued statements rejecting this course, and also opposing reopening the TPP-11 agreement to renegotiation. More importantly, the base of the Liberal Democratic Party, particularly in rural areas, is strongly opposed to entering bilateral negotiations which are certain to focus on pressure to open up Japan’s agricultural markets beyond the agreements already reached in the TPP.

Autos are also certain to be at the top of the U.S. agenda, a problem for those Japanese manufacturers who still base their production in Japan and will face pressure to move production to the U.S.

Abe may balk but he may have to offer a verbal agreement, without a clear time limit, to hold talks on a bilateral FTA. Trump’s pledge to re-examine the TPP might offer some small cover for this but Japanese already know it is largely meaningless. Still, an astute Japanese observer told me, “what Trump needs after this meeting is to brag about forcing Japan into new trade talks, not the outcome.”

Abe may offer instead something similar to what South Korea gave Trump – one-time nominal concessions that avoid FTA negotiations.

“Mumbling about an FTA is possible but really not Abe’s first choice,” says Matthew Goodman, a former senior State Department and White House official and head of international economic policy at the Center for Strategic and International Studies.

“Token market access concessions are more likely. There may be something they can do to move toward the TPP beef and pork openings and perhaps some other agricultural opening (not rice). And there’s probably something they can do on auto safety regulations, which seems to be a sore point for Trump.”

Trump may press Abe on two other fronts, both of which will also trigger opposition within Japan. Trump has long believed, and argued, that countries such as Japan and Korea should pay more for being ‘protected’ by the U.S. as compensation for their trade surpluses.

According to the senior administration official, Trump may ask for a higher level of host nation support for the U.S. forces based in Japan – Japan already pays about 70 percent of the costs such as land rent and base labor but Trump may ask to increase that to 100 percent.

Abe will also be under pressure to announce more accelerated and expanded purchases of American military equipment such as the F-35 fighter, something that Trump pays close attention to and likes to announce as economic victories for his administration.

Alongside trade, North Korea will occupy the rest of attention this week. Japanese officials have long been worried that Trump might buy into a deal with Pyongyang that would end their long-range ICBM missile program but leave the short and medium-range missiles that threaten Japan intact.

Those worries have acquired new urgency, however, due to the surprise agreement to hold the summit with Kim, driven by the push for engagement from the South Korean government.

Japanese officials did not miss that the nominee for Secretary of State, Mike Pompeo, during his confirmation hearings last week, stated the policy goal ending the threat to the U.S. homeland.
Some former senior American officials who have long involvement with North Korea have warned about this “trap” being set in the upcoming talks with Pyongyang.

“We should not underestimate the degree to which this American president, whose unapologetic nationalism and prioritization of ‘America first’ are core principles, may now be inclined to focus almost exclusively on the threat to America.”

“I can't rule out that Mr. Pompeo's statements on the Hill today may be a manifestation of this kind of thinking. If they are, it could explain why the president has been so upbeat about the forthcoming summit. And if they are, it is time for America's Asian allies to get nervous.”

Abe will certainly look for – and likely receive – some verbal assurances that Japan is being heard and will not be neglected. And Japanese officials are reassured to some extent by the appointment of John Bolton as National Security advisor.

Bolton, according to a former senior State Department official who served with him (and is not an admirer), is very “pro-Japanese” and a strong believer in the importance of the alliance. He also shares the views of Abe and Japanese conservatives toward China and Taiwan.

But the expected show of unity cannot wipe away the worry that the Trump-Kim summit could end in a place that leaves Japan deeply isolated. For Abe, that is not just a foreign policy problem – it is political problem as no Japanese prime minister can afford to be out of step, visibly, with Washington.

Two other crises loom in that regard – a possible break from the Iran nuclear agreement, which Japan strongly supports continuing, and increased tensions, if not direct clashes, with Russia. The Syria strike seems to have avoided those crises, for now, but that danger remains.

Abe supported the Syria strike but he has also carefully not supported other steps that are directly anti-Russian, for fear of souring any chance for a territorial deal with Putin. Abe pointedly did not join the U.S. and Europe in imposing sanctions for the Russian use of nerve agents to attack a former double agent in England.

Whatever happens in Florida, on or off the golf course, there is a growing sense in Tokyo that Abe’s magical chemistry with Trump has already drastically faded away, largely due to the fact that Trump is drowning in his own political morass. The Japanese now understand that Trump is focused on his own agenda and his own constituents, thus making trade, more than North Korea, the real subject of this meeting.

For Abe, desperately trying to keep his own premiership alive, the goal is simple – to look like a leader who must be kept in place for the benefit of Japan.